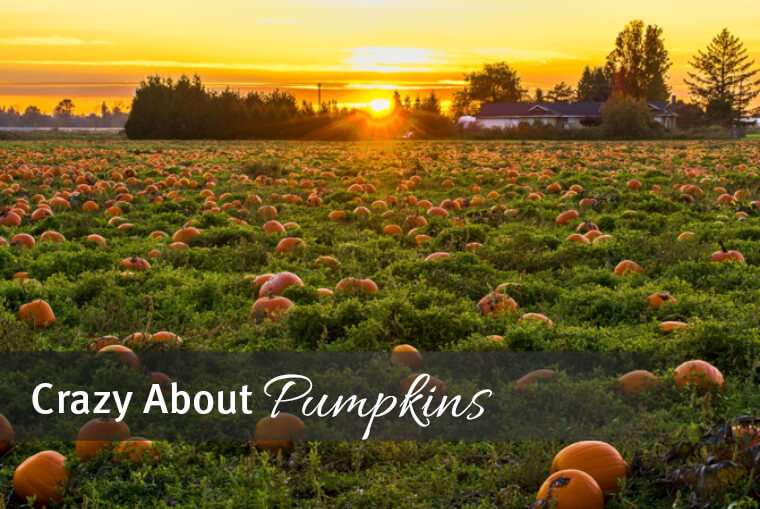 Why Pumpkins Are So Popular In The United States

What makes pumpkins special? They’re a rotund, festive squash that are typically a favorite around Halloween and Thanksgiving time in the United States. Americans are particularly keen on the pumpkin scene when fall comes around and trendy pumpkin-flavored desserts are back on the menu of their favorite restaurants, coffee shops and bakeries. How is it that a member of the gourd family became one of the most popular seasonal sensations in America?

The History of Pumpkins

Historically, European immigrants established the beginnings of pumpkin mania. With the simple recipe of cleaning out the insides and baking the pumpkin with milk, honey and spices, the first pumpkin pie was born. History.com says European immigrants brought over their Old World traditions and traded carving turnips and potatoes to easier canvasses like pumpkins to create their scary lanterns to ward off evil spirits. Thanks to tradition, pumpkins became a popular fall food with 80 percent of its supply available from October to January in America.

Although many don’t consider pumpkins an all day, everyday obsession, they are primarily consumed in the United States through canned processed pumpkin puree. The University of Illinois says that aside from processing, a small percentage of pumpkins are grown for ornamental sales, pumpkin sales through you-pick farms, farmers' market and retail sales. The most popular pumpkins sold are the ornamental (Halloween pumpkins) and the oblong, and flavorful, processing pumpkin, which is used for pie-making and pumpkin-related cooking. Interestingly, the pumpkin still manages to produce more per year pounds-wise compared to any other vegetables like cucumbers, squash and garlic. According to the U.S. Department of Agriculture, from 2001 to 2014, pumpkin production nearly doubled in value, from $75 million to $143 million.

With pumpkins linked to holidays such as Thanksgiving and Halloween, there is a psychological theory called “reactance,” that affects us. Reactance theory, explained by The Conversation, is the strong inclination to act on limited time offers like seasonal pumpkin spice flavors. Waiting until fall for the pumpkin spice latte season to start is like waiting for an award at the end of the corner. With this revelation, industries have profited off of this growing psychological enticement and have made pumpkin spice flavors a social and nostalgic situation for us. Through commercials, new soy milk flavors and cookies, pumpkin has been incorporated in countless ways and is pushed to be available all over the place during the fall. Unfortunately due to its seasonal shelf life, none of the pumpkin flavoring is created freshly and companies have to rely on a factory-made flavor. Fortunately, this also leaves local pumpkin farms safe, and gives you motivation to grow your own in your garden!

Now, with the demand for pumpkins growing, the smell of pumpkin spice can trigger you to imagine fall leaves, warm blankets and positive memories fluttering through your mind. You may find yourself waiting for next year once this season ends! Since the season hasn’t passed yet, try some of these activities with your family using your pumpkins!

If you find yourself interested in decorating your porch with pumpkins and having a vast selection to choose from, you can find pumpkins to decorate your home from SummerWinds here. Come by to pick one out, or to find out when to start growing pumpkins in your garden for a fall harvest next year!

About SummerWinds Nursery: SummerWinds Garden Centers is a leading high-end retailer of garden and nursery products. Headquartered in Boise, Idaho, SummerWinds operates retail nurseries in the greater Phoenix, Arizona area, and in Silicon Valley, California, making it one of the largest independent retail nursery companies in the west. SummerWinds appeals to both the serious and casual gardeners, with a broad selection of premium gardening products and a friendly and knowledgeable staff.